We’ve gotten so used to the words “reading” “terminal” and “market” as a phrase, that it’s easy to forget why those particular words are being put in that order. Terminal markets, according to Wikipedia, are central sites, usually in urban areas, that serve “as an assembly and trading place for commodities….usually at or near major transportation hubs.” Farmers would ship their produce via railroad, like the Reading, to a terminal market, where wholesalers would peruse the goods. While such markets still exist in some areas (one thinks immediately of the Fulton Fish Market, which, when it opened in the early 19th century, was part of a larger market) many have survived by turning themselves into eater’s paradises, where an average family or a couple can pick up some interesting produce and indulge in some ethnic cuisine. In that regard, much as I love it, Reading Terminal Market isn’t all that unique.

In fact, last summer, on a wonderful trip to Los Angeles with my companion, who had gone to graduate school there, we explored the Grand Central Market. While Reading Terminal Market is much more tourist-ready, the Grand Central Market offered its own array of regional and national delicacies, as you can see in this video, which gives a nice sense of the Market, as long as you can ignore the Casio keyboard sounding background music.

For some unremembered reason, we were there early in the morning, maybe right after it opened. Workers, just coming off the night shift, were sipping beers and  eating dinner-for-breakfast, while, in another corner, fresh fruits were being juiced for eye-opening smoothies.

Given the sizable Chicano and Latino populations, it’s no surprise that every chili pepper imaginable (or at least in this girl’s imagination) seemed to be available. And the pastries! Platter upon platter of sweet Mexican pastries, all for cents. While they crumbled to sweet dust when bitten, dunked in coffee they were divine. 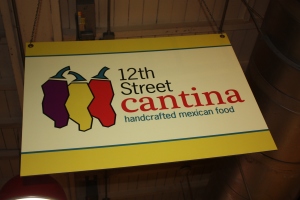 I had a hankering for similar grub on a recent foray to RTM, and ended up at the 12th Street Cantina, the Market’s only Mexican restaurant as far as I can tell. In homage to West Coast Mexican food, I ordered a fish taco, which, a sign assured me, would be cooked when ordered. And, in order to really judge, I accompanied it with an adobe pork taco and refried black beans. Red and green salsas are available on the counter, along with a variety of hot sauces. 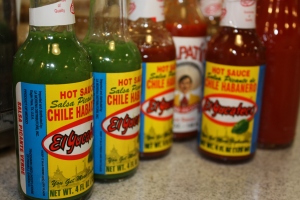 Both tacos were good, though not great. The fish taco was nicely spiced, but inexplicably came with tomato and lettuce rather than the crunchy cabbage slaw that would usually accompany this dish. Even stranger, there was no lime wedge with which to brighten the fish, though a bit of hot sauce was welcome.

that's the pork, in the back

The adobe pork was tasty, if a bit dry. Slow-cooked pork, it was shredded, with more lettuce and tomato. It, too, benefitted from a liberal application of the salsa verde, which left a tingling in my mouth. Both tacos, though, were watery, probably from the veggies, which made eating them messy.

The gold medal goes to the refried black beans, however, which could be a desert island dish. Well-spiced, creamy, warm and filling, the beans were excellent. Don’t really think too hard about the lard that was probably the source of such deliciousness. Sometimes, it’s better to just bask. Which is easy to do at 12th Street. Unlike most Market restaurants, not only does it have it’s own seating area, but it’s actually decorated to reference the cuisine it serves, with tiled walls and bright colors. Now, only if they started serving some beer, than this Cantina would be the perfect hangout spot, east or west coast style.

a bit watery, but maybe that's for the fish in the taco?

No denying it, I like the sensual things of the world, especially good food and drink, though I'm no snob when it comes to either. A background in American cultural history and food studies makes me approach the world with a desire for contextualization and connection on the way to synthesis.
View all posts by Mary Rizzo →
This entry was posted in food, Philadelphia, Uncategorized and tagged cantina, fish taco, Philadelphia, pork adobe, Reading Terminal Market, salsa, tacos. Bookmark the permalink.